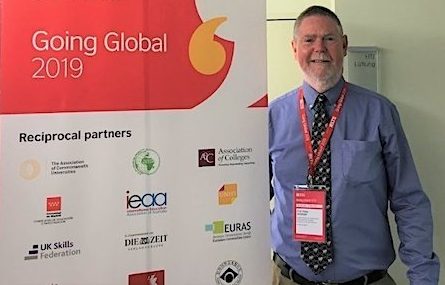 Using a range of shared examples from selected universities, this SDG Masterclass explored in detail how some universities are now facing up to the new challenges of the Sustainable Development Goals (SDGs).

For Philip, who had presented on the topic of the SDGs at the Going Global 2017 London Conference, this was a very welcome development.

Organised by the Association of Commonwealth Universities the workshop in Berlin heard from range of speakers on the role of Universities working towards the SDGs.

In the introductory session, Alex Wright of the ACU gave an excellent overview of the SDGs and stressed the importance of Universities in their delivery.  He noted that while the UN’s Millennium Development Goals (2000-15) did not explicitly reference higher education (HE) – either as a development goal or as a potential agent to address development challenges – their replacement, the SDGs adopted in 2015 very much include HE. This gives universities some exciting challenges and opportunities which need considerable exploration.

The need to capture and communicate SDG Impact was explored by Professor Luke Georghiou, Deputy Vice Chancellor University of Manchester.

The practical implications of the SDGs on university research and teaching were then explored by Professor Richard Davies, Pro-Vice Chancellor, Global, Newcastle University.

In the discussion sessions it was positively noted that not only is there a target in the SDGs for increasing equitable access to HE, but that for the very first time the goals also set out a comprehensive reform and development agenda for all countries.  It was also observed that the SDGs have created a common language and set of targets by which national and international development can be described.  In addition, the suggestion was made that in the light of the SDGs the very notion of International Development and how it is researched and taught in Universities may need to change.

Since the inception of the SDGs in 2015 a number of calls for universities to align themselves more strongly to the SDG agenda have arisen. New mechanisms for capturing universities’ contribution to the 17 SDGs are also being developed. See for example the Times Higher Education innovative new University SDG Rankings.

In the final discussions it was concluded that selected universities clearly recognised their responsibilities to contribute to local, national and international development see for example this list. It was however also widely recognised that at the current time there is a clear need for better understanding of the UN SDG agenda within many universities. It could be argued that the work required by universities in helping deliver the SDGs has only just begun.