Unauthorized logging in the Ebolowa I, Ebolowa II and Akom II communal forest 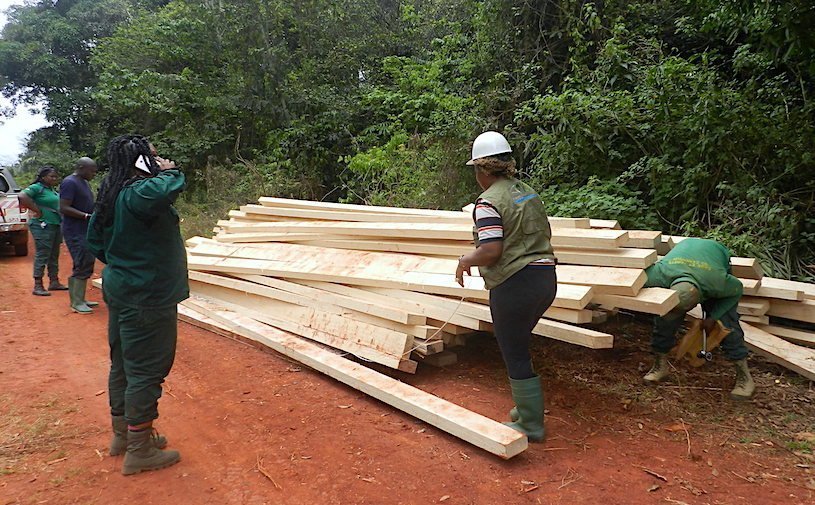 Unauthorised logging in a state forest in Ebemvok, a small village not far from Akom2 city, was observed during an independent monitoring (IM) mission carried out by the local ‘Centre local pour le Développement Alternatif (CeDLA)’. The state forest where the activity is taking place is the Ebolowa I, Ebolowa II and Akom II communal forest and it is being undertaken with Bubinga, which is a gas whose operation requires prior obtaining of a Non-Detriment Finding (NDF).

The IM mission was carried out according to the procedures of the SNOIE system [1], certified ISO 9001-2015. The denunciation report was submitted to the Ministry of Forestry and Wildlife (MINFOF) and to the Southern Regional Delegation of MINFOF, on 23 April 2019. In the report CeDLA notes that in the Ebolowa I, Ebolowa II and Akom II communal forest which is not yet in operation, a Bubinga exploitation site has been opened. During the mission, one unlabeled Bubinga strain, 2 jets and 3 Bubinga logs bearing seizures of forest administration were found on the farm site. In addition to Bubinga, marbles and seizure marks and unmarked strains of other species such as Dabema (including 4 marbles and 6 strains), Ebony (including a marble) were observed. The CeDLA team also found that the trees felled in the forest did not carry any mark before being seized, which clearly demonstrates that the perpetrator did not want to be identified in any way. Much more does not comply with forestry intervention standards (NIMF), such as non-marking of logs / logs non-marking of strains. 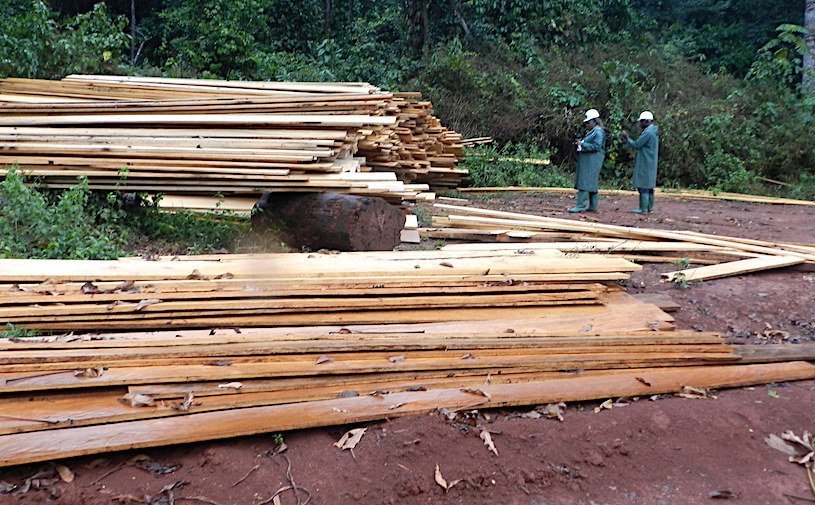 Concerning the alleged perpetrator, the investigations made it possible to identify an individual called “LAVENIR”. If he is found guilty by the forest administration, the punishment may be a fine of 3,000,000 to 10,000,000 CFA francs and/or imprisonment of 1-3 years, according to article 158 paragraph 1 of the law 94/01 of January 20, 1994 governing the regime of forests of fauna and fishing. However, it should be noted that information collected in the field, it is clear that this illegal activity was introduced on the ground by the Mayor of Akom II with the facilitation of some notable parties, in violation of Article 79 [2] of the Decree No. 95/531 / PM of 23 August 1995 laying down the terms of application of the forest regime and Article 3 (1) (2) and (3) [3] of Decree No. 2015/0994 of 29 April 2015 incorporating into the private domain Ebolowa I, Ebolowa II and Akom II a forest area of ​​33,368 hectares, called the “Ebolowa I, Ebolowa II and Akom II communal forest”. These acts could be described as complicit in unauthorised logging in a state forest, punishable under Article 97 (1.a and b) [4] of Law No. 2016/007 of 12 July 2016 on the Penal Code. This mission was carried out with the financial support of the CV4C project.

[2] Section 79 (1) “pursuant to section 52 of the Act, the operation of a communal forest is implemented, on the basis of its management plan and under the supervision of the administration responsible forests, by management or by sale of cut, or by license of exploitation, or by personal authorisation of cut.

[3] Article 3: (1) Income from the exploitation of this forest is public denial and is managed in accordance with the laws and regulations in force. (2) These revenues are intended exclusively for the financing of socio-economic development projects of the municipalities concerned. (3) The operation of the Ebolowa l, Ebolowa ll and Akom ll Communal Forest shall be carried out in accordance with the terms and conditions laid down in the related specifications and the joint decree of the ministries in charge of local and regional authorities, finances and forests setting the management of forest and wildlife resources for the neighboring municipalities and village communities.

[4] Article 97 (1a and b) “is an accomplice to an offense which is a crime or offense; (a) he who provokes, in any way whatsoever, the commission of the offense or gives instructions for committing it, b ) a person who aids or facilitates the preparation or consumption of the offense (…) “.