Logging companies in Cameroon have their titles suspended 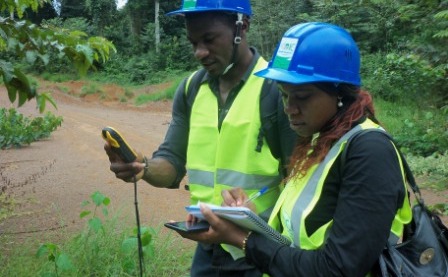 The Ministry of Forests and Wildlife informed the SNOIE Coordination of the suspension of several logging titles and the opening of litigations against companies that are perpetrators of facts denounced in the mission report carried out in the national forest domain around the villages of Ina, Wassaba, Oué and Manjah, located in the Central region. The logging companies involved in the denunciation report include Etablissements Mgbatou Pierre(EMP) and Société du Mbam et Kim(SMK). The same correspondence received by the SNOIE Coordination during the month of June 2018 indicates that, following the monitoring mission triggered by the denunciation and carried out by the National Control Brigade (BNC), “the facts denounced are proven”.

The MINFOF announces in its correspondence in addition to litigation that “several logging titles have been suspended” to companies incriminated in denunciation reports of cases of illegality that have been observed in valid titles in the villages of Ina, Wassaba , Oué and Manjan, located in the Central region – Cameroon. Even though the Minister did not specify that the companies EMP and SMK are the ones whose titles have been suspended, there is every reason to believe that they are the culprits because the illegalities of these companies were perpetrated in the villages listed below.

The companies EMP and SMK that were awarded the sale of standing volume (VC) 0804321 and UFA 08003 respectively in the villages, have been highlighted in denunciation reports as being guilty of non-compliance with the norms of exploitation punishable under Article 125 of the Law of 27 November 1981, as well as fraud on a logging document punishable under Article 158 (7) of Law No. 94/01 of 20 January 1994 laying down Forestry, Wildlife and Fisheries regulations.

In addition to these offenses, the company EMP was guilty of exploitation by sale of standing volume in national forest domain beyond the limits of  its logging concession in violation of articles 52, 53 and 54 of Law N ° 94/01 of  20 January  1994 laying down Forestry, Wildlife and Fisheries regulations  and punishable by Article 156 of the same law; unauthorised exploitation in the national forest domain by the company SMK in violation of article 53 (1) of Law No. 94/01 and punishable by article 158 (2) of this law. The marks of these two companies found on some logs at the park during the CSO investigation mission of   the SNOIE, led to the belief that these two companies were primarily responsible for these fraudulent forestry activities.

Data supporting the facts described in these denunciation reports against EMP and SMK, were collected and processed by three civil society organisations (FODER, PAPEL and CeDLA) under the Standardized External Independent Monitoring System (SNOIE) [4]. The necessary resources were mobilised within the framework of “Citizen Voices for Change: Congo Basin Forest Monitoring Project (CV4C)”, implemented with financial assistance of the European Union (EU).