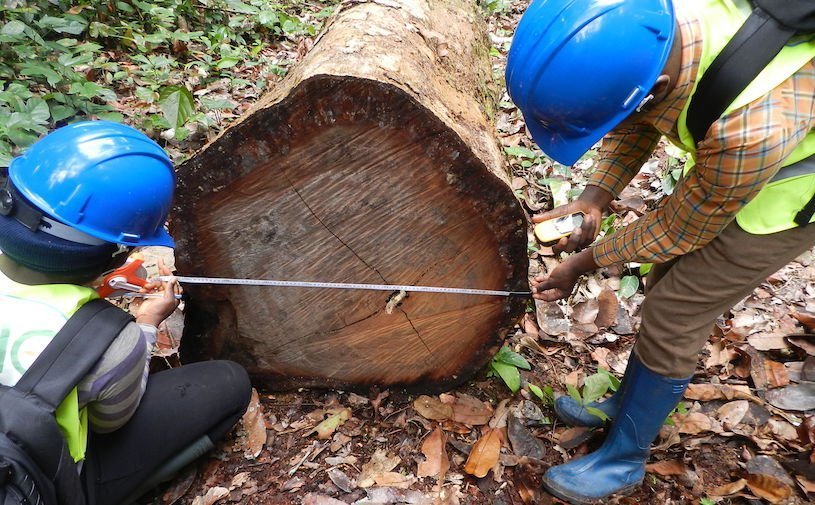 In a recent report of an external independent forest monitoring mission (IM) conducted by PAPEL (Livestock Support and Conservation of Biodiversity in Protected Areas in Cameroon), logging activities presumed unlawful were identified in the Abong-Mbang communal forest, which has a total area of ​​33,941 ha (administrative area) [1]. This mission was triggered by alerts from a community in the area using a community warning system. It has been demonstrated that logging is taking place beyond the limits of the Abong-Mbang communal forest. PAPEL monitors have discovered that exploitation within the forest limits does not respect technical norms. The mission was carried out according to the procedures of the ‘Standardised System of Independent External Observation (SNOIE [2])’, which has received financial support from the CV4C project.

Concerning the alleged illegalities relating to exploitation beyond forest limits, PAPEL monitors observed 15 identified strains of various species including the Ayous, Tiama, Iantandza, Movingui and Nkanang / Lotofa) among which one bears the same marks observed within the limits of the Abong-Mbang communal forest (i.e. “title 1405”) , and five beyond its limits. Five unsplit logs of the aforementioned species with a total volume of about 80,757 m3 after their strains were found, at the time of the mission, beyond the limits of the communal forest. In addition, by browsing the title of the communal forest, a lack of openness and materialisation of the outer limits was observed between the title 1405 and the forest of the national domain, a fact that is contrary to the technical standards of intervention in a forest environment.

The mission was triggered following a community alert issued via the forestLink platform [3], which enables the denunciation of suspected illegal logging in real time. This alert was triggered during the initial exploratory mission of the project “Monitoring Integrate Real-Time Community Monitoring to Sustain Livelihoods and Forests in Central and West Africa” ​​(RTM2 Project). PAPEL’s mission report was sent to the Ministry of Forests and Wildlife (MINFOF). The report recommends that MINFOF carry out a control mission in the Abong-Mbang communal forest and take the necessary measures in accordance with the forestry regulations in force. It should be noted that logging beyond the limits of the communal forest and of non-respect of the technical norms of intervention in forest environment, were committed in violation of article 46 (1) 3 Forestry Law No. 94/01 of January 20, 1994, which regulates forests, wildlife and fisheries. They are suppressed by the provisions of sections 158 (4) and 65 (5) of the same Act. The penalties provided for are: a fine of 3,000,000 to 10,000,000 CFA and imprisonment of one (1) year to three (3) years or only one of these penalties.