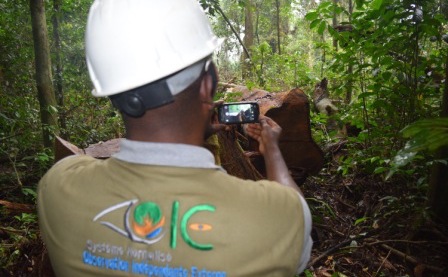 The Ministry of Forests and Wildlife recently opened a dispute against the company VERA Forestière who was awarded the sale of standing volume No. 0801238. This open dispute follows a denunciation made by the association Forêts et Développement Rural(FODER), after an external independent monitoring mission conducted according to the procedures of the Standardized External Independent Monitoring System (SNOIE).

The denunciation report submitted to MINFOF in April 2018 enabled the administration to set up a control mission in the company’s logging concession. According to the MINFOF newsletter sent to the SNOIE Coordination on 16 May 2018, the company VERA Forestière was guilty of operating outside the limits of its allocated logging concession, and consequently proceeded to illegal logging in the localities of Bidi and Ngoume, sub-division  of Gambè – Tikar. During the IM missions conducted by FODER from 11 to 14 April 2018, the team of monitors was able to pick up unmarked logs and an unnamed watercourse obstructed by damages caused by “illegal” logging perpetrated by the company VERA Forestière. These facts constitute evidence of illegal logging.

The litigation opened by the administration against this company reaffirms “facts on illegalities” compiled in the denunciation report. In this report, other illegalities were also observed in the national forest domain (NFD) in the village of Bidi (Sub-division of Ngambè-Tikar). These include:

Exploitation outside the limits of the allocated logging concession of which VERA Forestière is guilty are punishable by Law No.94/01 of 20 January 1994 laying down forestry, wildlife and fisheries regulations under Article 157, which stipulates that “It is punishable by a fine of 3,000,000 to 10,000,000 FCFA and an imprisonment of six months to a year, or one of these two penalties, the victim of one of the following offenses: unauthorised exploitation in a national forest domain …“.