Alumni spotlight: Ramesh Zutshi reflects on his ‘Forestry, Gender and Development’ programme back in 1992

24 March 2021
833 Views
Comments are off for this post
Alumni, Gender Equality and Social Inclusion, Impact Stories 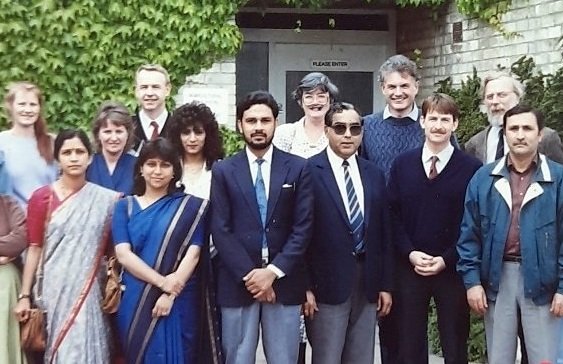 “Back in early 1992 I was, at 34, the youngest lecturer at the ‘Agricultural Education & Training Unit’ (AETU) and as the one with a forestry background, responsible to coordinate a 12 week bespoke British Council commissioned course called ‘Forestry: Gender and Development’ (FGD) for very senior Indian Forest Officers. The course was tasked to update these mid-career professionals on tools and approaches to increase social inclusion, gender equity, indigenous peoples community level rights and participation in rural development.

The FGD was the very first course AETU ran for the Indian forest service. It later became known as the ‘Forestry People and Participation’ course and ran annually throughout the 1990s, by the end of which the AETU had been renamed to the Centre for International Development & Training (CIDT).

Within that first mixed gender course group was a lively quick witted gentleman called Zutshi who had worked as a forest officer in Bihar state and within the Indian forest service that is a very tough state to work in for a variety of reasons. So he had plenty of very grounded experience to refer to in our sessions and discussions.

Zutshi had never before had the opportunity to visit Europe and he relished the whole experience of being here. For me it was a genuine pleasure to have spent time with Zutshi and later, when I had the opportunity to visit Dehra Dun, be entertained in his home in India. I still smile remembering his jokes and numerous recollections: he is an excellent story teller with fantastic factual recall interested in everything from philosophy to botany to ecology to politics etc. etc.

Here is his recollection of his time with us at ‘Wolverhampton Polytechnic’ of almost 30 years ago!

Recollections of my time at Walsall, Wolverhampton Polytechnic, Spring 1992

by Ramesh Kumar Zutshi, Retired Principal Chief Conservator of Forests and Head of the Forest Force of Jharkhand State, India.

Thirty years ago in 1991 soon after my posting as a Professor with teaching and lecturing duties at the Indian Forest Service’s Indira Gandhi National Forest Academy the British Government offered me a bursary to go to the UK for one year under their ‘Trainers Training Programme’. I declined and said I couldn’t leave my family for a year and so was put on a 3-month course on ‘Forestry, Gender and Development’. Most of our Indian government systems were British and I had read English literature: Robinson Crusoe, Arthur Conan Doyle, Somerset Maugham, Thomas Hardy, Dickens and dozens of others. From these I was sort of familiar with the aloofness of the British, discipline, pubs and fish & chips! I hoped to see how the British had managed to rule over 64 countries and the course on Gender was secondary, as I saw it!

In March 1992, we nine Indian Forest Service Officers flew to the UK and landed in Walsall. The course program sounded novel, and I reckoned it had something to do with equality and opportunities for women. It was run by the ‘Agricultural Education & Training Unit’ (AETU) on Walsall Campus, Wolverhampton Polytechnic in the West Midlands, and our course tutor was a young staff member called Des Mahony. In the first week we attended the Oxford Forestry Conference on ‘Wise Management of Tropical Forests’ and learned a lot about management of Tropical Forests. Participants were from all over the world and there was opportunity to talk to everyone during mealtimes. Then we returned to Walsall and had lectures on what Gender Issues were really about, what were our expectations, forestry and development and also exercises in communication and leadership.

Midway through the programme we had a wonderful opportunity to meet and interview rural people in northern Portugal. This two-week study tour brought gender issues and rural development lectures alive for me. We stayed at the Hostel of Escola Superiora Agricola, at Refois de Lima and began visiting these 2-3 hectare small holding farms in the surrounding countryside. The terrain in this northern part of Portugal was undulating and hilly. The interesting thing was, each farm-lady offering us their own house wines, while questions were asked, information sought. This was probably the only place in Europe where we could see old farming family women riding on top of haystacks in a Bullock Cart. Besides farm visits, we looked at some plantations with Eucalyptus and other Exotic species, visited the Vino Verde Factory. Northern Portugal was chosen for this rural study fieldtrip because participants on our course and other courses were from Developing Countries. In most of Northern Europe, the conditions were not such that could help us understand rural processes, occupations, livelihood issues, role of men or women in rural communities. Concerning gender roles men in this part of Portugal had to work as migrant labourers in northern Europe and leave female relatives to manage these homesteads. In fact, gender roles, in this situation were altered because of the absence of men. So, in this trip we saw with our own eyes and came to understand how people in rural areas of a country like Portugal managed their land holdings, homesteads, incomes and processes involved.  This gave us food for thought to reflect and compare with our own rural communities in India.

After the Portugal tour we returned to Walsall to make presentations regarding the visit. These presentations were attended by the faculty, two or three of whom evaluated our presentation and lecturing skills. They were noting down things like Repetitions, Gestures, Emphasis, Rambling, Involuntary Movements of Body Parts, and all other things necessary to make a lecture effective and understandable to the audience. These presentations were video-taped and given to us individually to look at them at our leisure along with a report of the evaluators. Fantastic, I thought, because, here you could reflect on the report about your presentation and see it for yourself. In my view, this was what helped establish me as a lecturer at the Indian Forestry Academy where I was teaching; and helped with problems during my lecture sessions with Indian Forest Service probationary trainees.

During the course we also had outings to the Black Country Museum, plantations and logging sites and a visit to London including Kew Herbarium. We had a trip to Scotland, Edinburgh mainly, where we attended a conference relating to domestication of secondary species and some ecology. We also met with the Forestry Commission personnel in their HQ Building. During my time I learned a lot about local customs and prejudices during such outings.

Impact of the course on my work after my return

By the time I came to the UK I had put in 19 years with the Indian forestry service, 15 of these in Bihar State in various Forest Divisions. I had been promoted to the Rank of Conservator of Forests in 1986, a supervisory position. I was posted mostly in areas, where large tribal populations lived so there was plenty of time and occasion to see how, men and women played their roles in the running of their households and affairs of the community they lived in. I had noticed all over my district postings that many tribal males quite often were inebriated from drinking rice beer by mid-morning while females had by then returned from the fringe forests with a head load of fuel wood with girl children trudging along with some edible forest fruits. Females would then provide breakfast of rice flour bread cooked over a terracotta girdle or a few Chapattis to the males and children, whilst males were generally loafing around. In logging season (October to June) they would find employment in forest coupes (delineated areas for felling) and log, billet, stack timber or firewood produced. In our households too, back in Kashmir, males of any family would be employed in remote areas and there being no motorised transport, they would be home once in 6-9 months. During this time, women did shopping for the household, normally the domain of males, alongside their duties of cooking, washing, winnowing and all other housework. Female children’s toys were generally kitchen related! Boys would get Cricket bats, wooden balls to play and bicycles too. So, from the beginning, there was this ‘gender conditioning’ taking place, all the time, in urban educated households too. The Walsall Course opened our eyes a bit more about this. I, personally, could recall practises, processes, traditions etc. in a different light. I must admit though, it was so in my household too.

It followed that, on arrival back to India to Dehradun and my academic job, I persisted with the Director of our Academy to recruit a female faculty member to support female students on our courses. Since there were always a dozen or more female probationers, it received favour from the Central Government and a female officer was hired on deputation from a State. So the female probationers had someone whom they could go to with problems specific to them. Later, when transferred as Dean and Principal of the State Forest College on the same campus, I likewise insisted on recruiting a woman to the college faculty. I would speak on ‘Gender Issues Related to Forestry Development’ on a regular basis to State service officers coming on short in-service training courses and in our Service Groups. Somehow, issues related to gender vis-a-vis these topics crept into my presentations on topics of Silviculture and issues related to conflict between mining and forestry too!

The best thing that happened due to the efforts of Walsall Faculty was that, I was now a more confident lecturer with some presence! I received top ratings from groups of probationers of the Indian Forest Service, the State Forest Service Trainees and from the one week courses of my own service people. It would gladden my heart when a participant, a rank or two higher than mine, came up to me, patted my back and complimented me on the content of my lecture, or fielding questions or keeping my lecture or discussion restricted to the time allowed to me.

This sums up Walsall for me. Trainer was trained, after all!